University of Tennessee at Chattanooga Athletics

The integrated workflow we have with Adobe video tools and Cantemo Portal allows us to create more video of even higher caliber, much faster, and with a staff of only three people.

At University of Tennessee at Chattanooga (UTC), athletics spur school spirit and build enthusiasm and unity. To engage fans of all 17 of the university’s sports, the MocsVision team produces hours of polished video a week and delivers live, crowd-pleasing updates such as instant replays during football and basketball games. To generate massive volumes of compelling sports entertainment as efficiently as possible, a small staff relies on Adobe video tools, including Adobe Premiere Pro, and Cantemo Portal media asset management (MAM) as the hub.

Up until 2010, Seaton was the sole person working on footage using a standalone machine running Final Cut Pro for non-linear editing (NLE). However, the workload started burgeoning. Today, the team is responsible for three weekly half-hour TV shows, 2,000 pieces of video web content annually, and ads appearing on local cable TV channels. This is in addition to the live content delivered during roughly 50 basketball and football games each year—some containing historical footage from matchups shot as far back as the 1950s. The MocsVision team live streams more than 100 games from other sports annually as well. 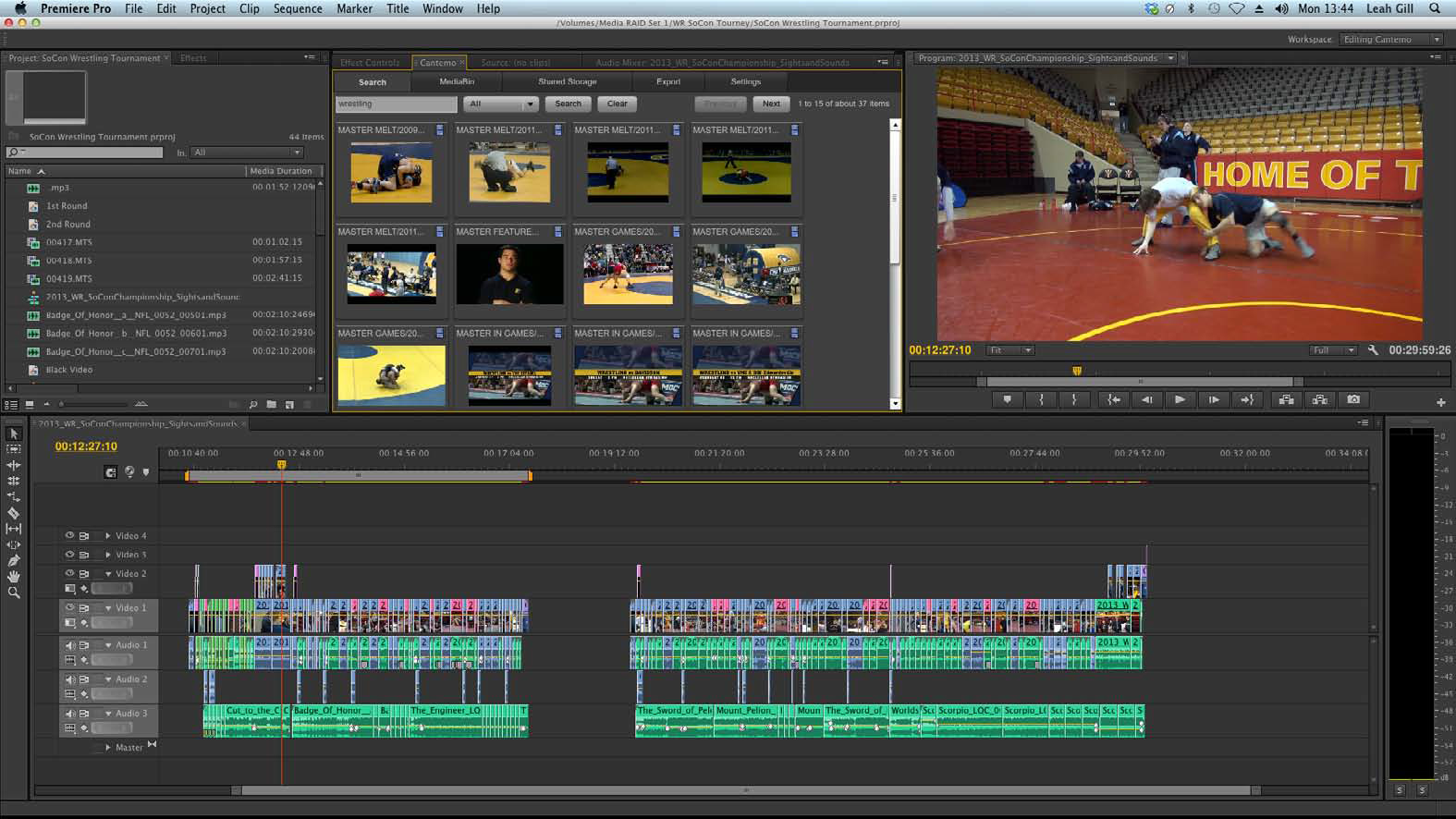 Data volumes and sophistication continue to rise as well. Capturing a single football game from every angle and multiple camera sites typically results in 250GB of footage. Graphics such as dates and opponent logos are vital, and they must be updated for each event.

It became clear that UTC needed to expand its staff, enable them to work on the same footage simultaneously to increase efficiency, and find a better way to organize and effectively search a mushrooming pool of assets. The university began evaluating multiple options for both editing and media asset management with an eye toward cost-effectiveness. The Creative Services team evaluated Final Cut Pro and Final Cut Server, Adobe video tools, and Avid. A key goal was to help ensure that content stored in the asset manager would work seamlessly with the NLE.

At first, Final Cut and Final Cut Server topped the list due to familiarity. Then Final Cut Pro X was introduced and, according to Seaton, it lacked the professional features required. When Final Cut Server was discontinued, the team went back to the drawing board. They quickly ruled out Avid due to expense. With guidance from UTC’s system integrator 1303 Systems, Adobe Premiere Pro and Cantemo Portal emerged as the top contenders.

Creative Services had used Adobe After Effects® and Photoshop® for years to add effects and graphics to projects in Final Cut Pro, yet they had never tried Adobe Premiere Pro. Once they began using it, they discovered a gem that had been right at their fingertips for years—one that had matured to include advanced features not available in other NLEs.

According to Seaton, Adobe Premiere Pro offered a simple interface and the ability to map Final Cut Pro keyboard shortcuts to Adobe Premiere Pro, virtually eliminating the learning curve for editors. Another enormous bonus: it integrated seamlessly with Adobe’s other tools, as well as with Cantemo Portal, a scalable asset manager capable of supporting the deep metadata sets needed to organize content for 17 sports.

The integrated workflow we have with Adobe video tools and Cantemo Portal allows us to create more video of even higher caliber, much faster, and with a staff of only three people.

Due to Cantemo’s deep integration with Adobe Premiere Pro, editors can continue working within Adobe’s NLE, with the knowledge that the underlying media asset management system is taking care of the fundamentals such as movement of files and proxy generation. Users can search assets, import them into the timeline from the Adobe Premiere Pro Project Panel, browse shared storage, and export assets back into Cantemo Portal. They can also use the intuitive yet powerful HTML5-based user interface of Cantemo Portal to perform more advanced operations on content such as managing rights, defining automated workflows, and ingesting, tagging, and exporting content. 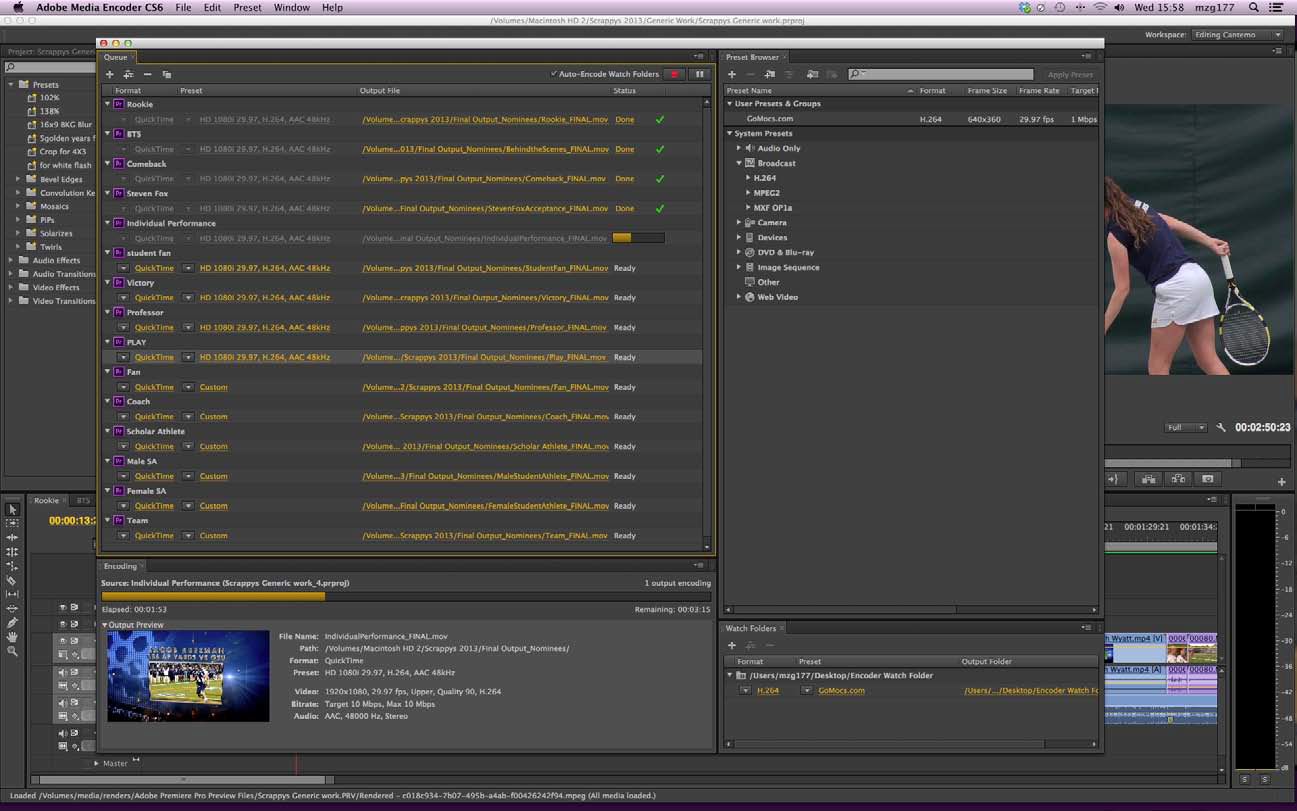 Two factors really tipped the scales for us. First was the ability using Adobe Dynamic Link to ‘round-trip’ edited footage seamlessly among the Adobe software components, saving each of us an hour or more a week. The other was the scalable and flexible metadata support in Cantemo Portal, vital for managing the many different sports here at UTC. The integration between Cantemo Portal and Adobe Premiere Pro made it incredibly easy to find and bring footage and graphics into and out of storage—without ever having to leave the Adobe Premiere Pro interface.

Today, the staff shoots sporting events primarily on Sony XDCAM EX and AVCHD format. Using Adobe Bridge, they add metadata to footage in batches, organizing them based on variables such as game footage, date shot, footage destined for a specific type of export, broadcast content, or graphics such as logos. Every asset is ingested into Cantemo Portal and tagged based on the type of content and sport.

Organizing assets is far easier. At the end of the football season, the team has roughly 15 terabytes of footage to sift through if a particular clip is needed. They can now search by keywords or scrub through a series of assets in the intuitive, browser-like Project Panel interface in Adobe Premiere Pro. The group also works with hundreds of hours of historical footage shot on everything from 8- or 16-millimeter film, beta, DVCAM, and more. These great moments in history can be found in Cantemo Portal, dropped onto the Adobe Premiere Pro timeline effortlessly without transcoding, and then shown live on the video board during games. For graphics-heavy pieces, editors can find and lay out shots, add transitions, and render music, graphics, and video footage together with ease and speed.

Other Adobe video software components are central to the workflow. To transcode and export footage into a wide variety of formats, an important capability for local TV stations that require different delivery codecs for ads, the staff relies on Adobe Media Encoder. Transcoding occurs on a Mac Mini that is not tied into the editing or effects workflow, so editors can move onto the next project while transcoding occurs on another machine.

Footage moves from Cantemo Portal to Adobe Premiere Pro to Media Encoder so easily. In the past, when we were exporting and transcoding something, workflows came to a grinding halt because all system resources were tied up. With Adobe video tools, we’re spending a lot less time standing around drinking coffee. 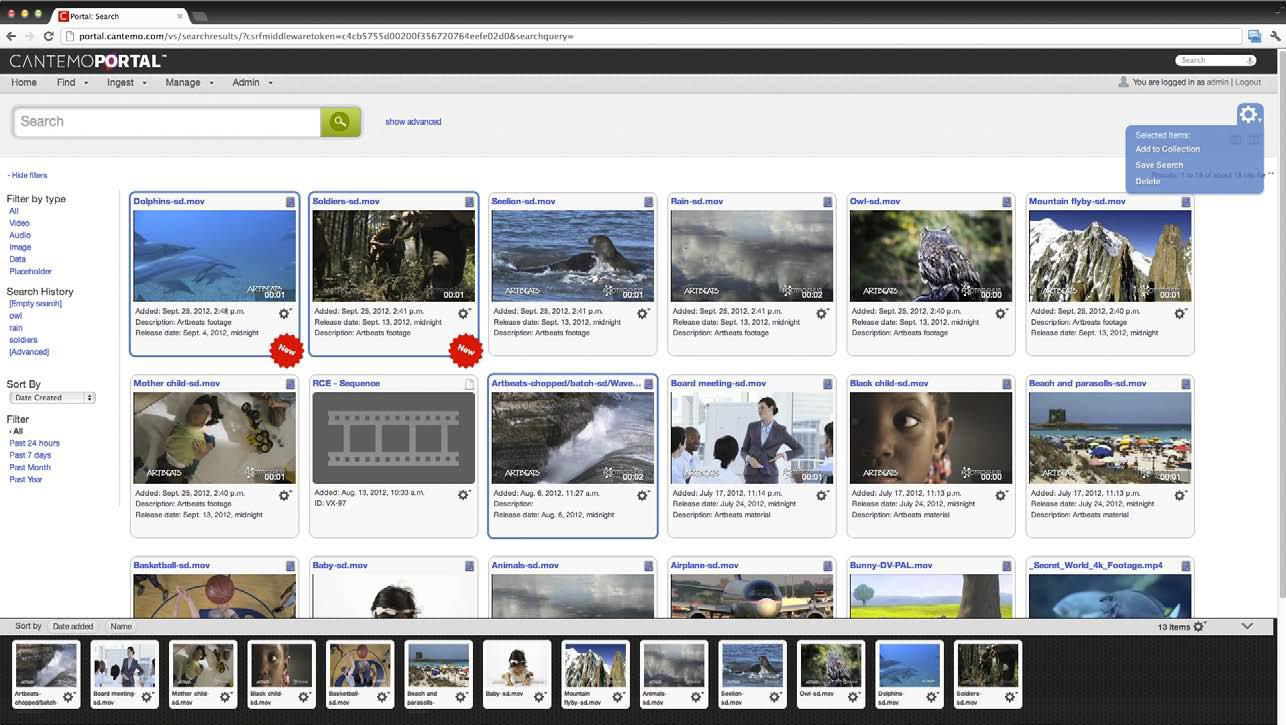 After Effects and Photoshop continue to provide the underpinnings for effects and graphics, yet they bring the additional advantage of integration and round-trip editing with instant updates reflected within Adobe Premiere Pro, without re-rendering. The team can quickly tweak graphics or change a text layer, with all changes reflected in the Adobe NLE. Adobe Audition facilitates audio editing, and to create DVDs, Creative Services uses Adobe Encore.

We are much more efficient than we ever had been before, because all the software pieces and architectures talk to each other so well.

The workflow using Adobe video tools and Cantemo Portal has been so effective that the university plans to build out additional edit suites for the communications department, and even for students so they can gain hands-on video experience. They also plan to extend the current Cantemo Portal with LTO support for long-term archiving.

The biggest thing I was hoping about moving to Adobe Premiere Pro and Cantemo Portal was that I could get more sleep, and the move has definitely done that. We are much more efficient than we ever had been before, because all the software pieces and architectures talk to each other so well.